A guide to using reviews in e-commerce

The positive impact of reviews in e-commerce is already a well-established concept in the industry and there are several argumentations supporting it.

The effect of using reviews in e-commerce

As with everything else in life, using reviews in e-commerce has its “dos and don’ts”. Most of it is common-sense, but not everything. For instance, it might not be straight forward for everyone to think that negative reviews can have a positive effect on online sales, but it’s still true, as explained (in short but correctly) by online business reviews aggregator Yelp.

These points seem pretty obvious. So I would like to bring some light on the not-so-obvious facts learned so far within the e-commerce business. Is there a specific type of reviews used in the e-commerce environment that is more effective than others?

It’s all about trust

The Internet is a very diverse place. It’s full of so many useful things and it has brought an unparalleled advancement for humanity in communication and globalization. But it is also a place full of ever-ongoing scams and frauds. Therefore, it doesn’t come as shock to anyone that online consumers, in general, think twice before making an online purchase. The keyword here is ‘trust’.

Any information about a product which increases the level of consumer trust will ultimately be a competitive advantage for sales. Consumers want to feel sure they are choosing the correct product to invest in. And that the seller have a legit operation when it comes to pricing, delivery and returns.

In a rather recent study performed by Nielsen, strong evidence has been found. There’s actually a significant difference in the impact of “user reviews” vs “expert reviews”. For the purpose of the study, “expert content” was defined as reviews and articles selected from third-party websites and blogs dedicated to the relevant product category and “User reviews” was defined as selected from the reviews portion of major online retailers or forums. In the study, there is a distinction between different parts of a shopper’s journey. The results are displayed in Figure 1 below: 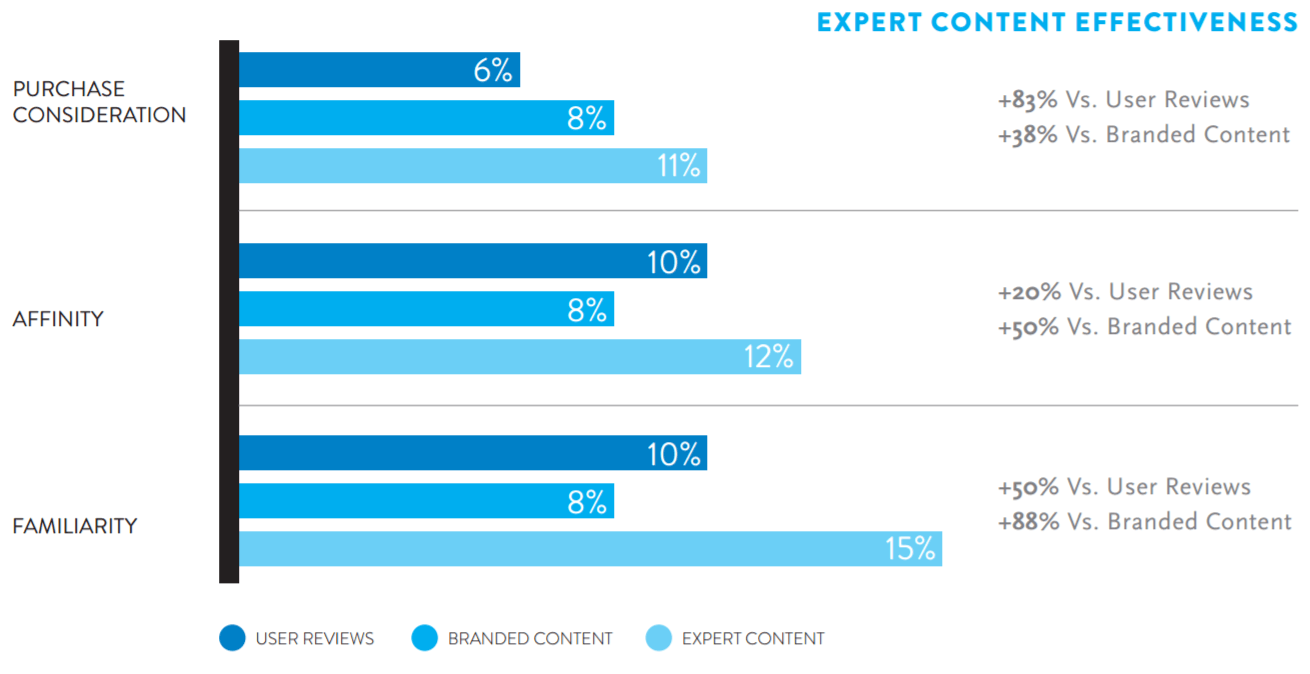 These findings are especially interesting because of the fact that most e-retailers display only user reviews and not expert reviews. Are they missing out?

It’s interesting to speculate as to why the results came in like they did. During my 15 years of experience within online retail, I have come to realize that there is no counter-relation between expert reviews and user reviews. Both bring trust to the consumer and thus value to the seller and brand in the form of increased conversion rates. My own perception of the matter is more leaning towards simple personal preference: some consumers prefer user reviews over expert reviews and vice versa. The study from Nielsen does however clearly imply that expert reviews have a significant advantage. So what can the reasons be?

One clear advantage of expert reviews is that they bring more “weight”. From my perspective, this extra weight comes from two major facts. Firstly, review publications are well-known and thus recognized by consumers in the specific market as trustworthy (like pcmag.com in USA or trustedreviews.com in the UK). Secondly and perhaps more importantly, it’s also true that an editor of an expert review publication, who has reviewed hundreds of digital cameras (as example), is likely more knowledgeable than random consumers who in most cases have only owned one or two older models.

The editor will compare the product with other recently-released cameras from competing brands, while the consumer will compare the camera to their last camera which they purchased years ago. Thus, I think it’s safe to assume that the editor of the expert review publication is likely more qualified to judge how good the product really is.

Can reviews be used to mislead the customer?

Again, if we consider ‘trust’ as the main reason why reviews increase conversion rates, one must mention the true plague of the reviews business which is fraudulent reviews. We’ve seen some troubling news about how sellers and manufacturers have abused this “power of reviews”. It basically comes down to “paid-for” positive reviews (in various forms).

I would argue that this is mainly a problem for user reviews. Because I often see that the review submission “control mechanisms” are not developed or deployed correctly. As an example, some retailers allow review-submissions by any member, even from members who haven’t purchased the product. These kinds of practices will ensure that a larger number of reviews are generated. However, the backside is that it makes it easier to abuse such a system.

Some stakeholder are clearly aware of the risk of hollowing the trustworthiness of reviews and are taking measures to counter this abusive behaviour in various ways. One recent example of such countermeasures was communicated by Amazon in October, 2016. Amazon users can now only submit five reviews per week of products not bought from Amazon. I think it’s a good first step and that we’ll see further strengthening of these rules in the near future.

So, expert reviews or user reviews?

Reviews as an online conversion driving factor is an effective tool and provides a competitive advantage in e-commerce business. Of course, those who employ it correctly. Scientific evidence exists which implies that expert reviews are more effective than user reviews when it comes to increasing conversion rates.

Fredrik is the CEO of review system provider Testseek. Since 2006, it’s been Testseek’s mission to work as an unbiased review aggregator for the eCommerce channel. Among Testseek’s clients are Intel and Samsung but also many smaller and medium sized retailers and shopping portals. Testseek main purpose is to help businesses take advantage of the power of reviews. More about Testseek: https://www.testseek.com/